Someone sent me a link about a new book, “Death of a Guru”.  It is a compelling story of a Hindu guru’s conversion to Christianity and points out the many inconsistencies of the Hindu religion and rejects the belief that God is all and all is God.  I posted the following comment.

Thank you for sharing. This points out many inconsistencies in the Hindu religion. However I believe the same can be found in Christianity and others as well. As a former Christian, I do not believe that salvation is to be found in any “belief”. It makes absolutely no sense to me that a loving God would create sentient beings (humans) incapable of meeting His standard and condemn them for it or demand they seek his forgiveness for the way they were created. Such would not represent love or freedom. If one is given two choices, one leading to bliss and the other to destruction, such is not freedom but coercion. Such is not love but manipulation. Such implies escape from punishment for something one could not avoid through fear. Would love offer to “save” people by threatening eternal punishment? We say that Jesus “voluntarily died for our sins”. What if he hadn’t? God was busily creating humans and condemning every one until Jesus decided to do something about the awful mess God was making?

Saying that man’s dilemma is because God gave man freedom and man misused it by choosing sin makes no sense.  Man is incapable of living sinless, so where’s the free choice?

People get caught up in endless concepts and ideas about what God is and one is as sincere as the other in wanting to serve and honor God. None, however, are condemned. Would love condemn misunderstanding? Love does not condemn. What loving parent would condemn a child regardless of conduct?

In my opinion, religions make a mockery of both God and love.

I am absolutely convinced that, indeed, there is only God and we are IT. The One could not express without contrast, hence duality, opposites, good, evil, hot, cold, etc. etc. In my opinion the great relief, awakening, or rising above suffering, dismay, seeking, etc. etc. is simply surrender to that which we really are in the abandonment of the ego, self seeking, greater attainment, etc. I do believe in Jesus but I do not believe he came as a sacrifice for sin but to demonstrate REAL love, surrender and non resistance.  Jesus knew what he really was, that he was not a body but indestructible and demonstrated it.

Those who believe in a separate judging God look outside themselves for truth.  Those who realize oneness look inside.

Those who look outside judge and decipher between endless hand-me-down beliefs, doctrines, scriptures, etc. or most generally just accept the belief of their upbringing or culture.

Those who look inside relieve themselves of thinking, debating, etc. and are simply aware of the unfathomable magnificence of “what is” while knowing they are IT.

Known is a drop, Unknown is an Ocean 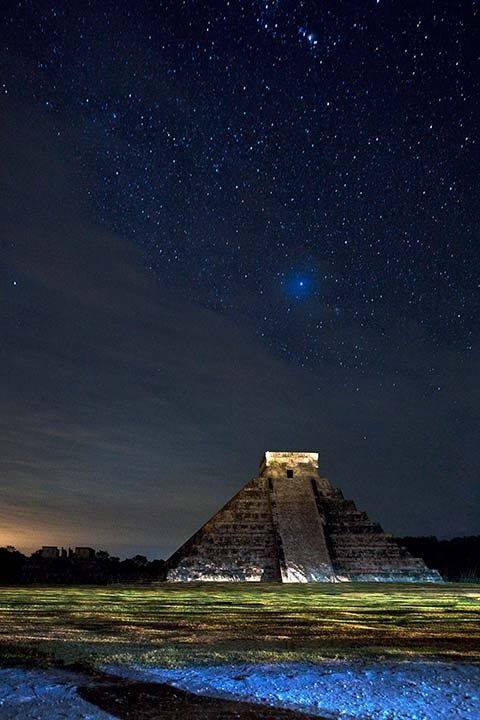 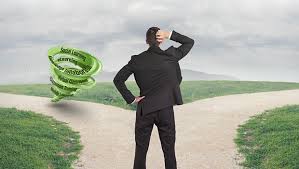 (An Excerpt from an article by Dennis Waite)

What exactly is happening when we decide to do something? We might say that it is an intellectual discrimination between several options or the logical conclusion of a series of reasoned arguments. Indeed we might make a variety of similarly waffly statements but what do they actually mean when reduced to essentials? Do we not simply mean that a thought occurred to us to do something? An idea arose in our consciousness and the action followed?

Again I ask you, where do ideas come from? What do we do to initiate an idea? Do we sit down and say: “Right, I am going to have an idea about action”? Well yes, you might say, if you are writing a book in which this is one of the subjects! But even if you do sit down with this intention, what do you do to bring those ideas into the open? If you are having difficulty with the whole concept, I will tell you the answer – there is nothing that you can do. Basically, ideas come to you – when they are good and ready. Thoughts arise and that is all that you can say.

Of course you can put yourself into a particular situation and make good predictions about what thoughts you will have. For example, if you take a man who has been starved of food for several days and place him in a cake shop, you can make a pretty good guess about the sorts of thoughts that will arise. The point is not that thoughts do not follow logically from one to another but that we are unable to initiate a particular thought of our own volition. As far as thinking is concerned, we are still not doing anything. The thoughts are simply coming to us from we know not where and triggering other thoughts and arguments in a manner determined by our particular personality and nature. All of this happens quite automatically and without our conscious consent or will.

If so, so are you! There can be only one infinite. Is God infinite? If so, you are God.  Obviously, there could be nothing separate from the infinite or one would infringe on the other and no infinite could be possible.

God is all and all is God!  You and I are the senses of God expressing and experiencing His/Her creation.  The Infinite could not express or experience as ONE because there could be no comparisons, opposites or contrast, hence the universe.

You may say, well you are trying to explain God which is vastly beyond your capability and you are quite correct. However, God does not violate the very principles of reason and logic He established. How could one ever decipher between the thousands of beliefs if one did not resort to reason and logic? Would God expect otherwise? Would God expect us to just accept a belief because it happens to be the one taught in our cultural or geographical location?.  One only need to look at the world to realize that beliefs, religions, faiths, etc. are by and large grouped by culture or upbringing and hardly reflect a balanced “saved” or “unsaved”.  Regardless of which religion one advocates, virtually everyone is sincere in wishing to serve their creator.  Again, it takes little reasoning to realize that love would not reject true sincerity.

Nothing new being presented here.  This philosophy has been around for thousands of years and longer than most religions and I strongly suspect it is much closer to what Jesus was actually trying to teach than what the churches are proclaiming.

I’ve always been a great admirer of Einstein.  I love the man and the way he dealt with life.  Certainly he wasn’t perfect but who of us are.  He was mostly an humble and gentle man and never claimed genius but stated that the information just flowed to him through his imagination.

He had a sense of humor, one of his less famous quotes, “if you’re kissing a pretty girl while driving, you’re not giving sufficient attention to the kiss”.

I list some facts that you may not be aware of.  His favorite hobbies, sailing and the violin.  He never learned to swim but never missed a chance to go sailing throughout his life where he could get away with his note pad and thoughts.  Einstein’s mother, Pauline, was an accomplished pianist and wanted her son to love music too, so she started him on violin lessons when he was six years old. Unfortunately, at first, Einstein hated playing the violin. He would much rather build houses of cards, which he was really good at (he once built one 14 stories high!), or do just about anything else. When Einstein was 13-years old, he suddenly changed his mind about the violin when he heard the music of Mozart. With a new passion for playing, Einstein continued to play the violin until the last few years of his life. For nearly seven decades, Einstein would not only use the violin to relax when he became stuck in his thinking process, he would play socially at local recitals or join in impromptu groups such as Christmas carolers who stopped at his home.

Already a high school drop out, he failed his 1st college entrance exam, and had to go to a secondary school in Switzerland.

He divorced his first wife because of an affair with his first cousin, Elsa whom he later married.  Einstein’s mother and Elsa’s were sisters.

Einstein was born with an abnormally big head. Combined with his late start in speaking, doctors were concerned he might be retarded.

As soon as Adolf Hitler was granted German citizenship and began to take power and spread his Nazi anti-Semitic ideas, the German-Jewish physicist Albert Einstein took a stand against Nazism and quickly took action to leave Germany. Einstein helped to organize a non-partisan group that stood united against fascism. Einstein, his family, and his secretary left Germany, and in March 1933, he renounced his German citizenship, declared his resignation from the Prussian Academy of Sciences, quickly separated himself from all German institutions that he had worked with, and announced that he would not return to Germany. Einstein stood against the Nazi regime and declared as he and his family moved to the United States of America in 1933: “I shall live in a land where political freedom, tolerance, and equality of all citizens reign.”  Hitler considered him public enemy number one.

At age 73 he was offered the presidency of Israel but refused saying, “I know a little about science but nothing about men, besides I’m getting a bit old”.

Part of Einstein’s charm was his disheveled look. In addition to his uncombed hair, one of Einstein’s peculiar habits was to never wear socks. Whether it was while out sailing or to a formal dinner at the White House, Einstein went without socks everywhere. To Einstein, socks were a pain because they often would get holes in them. Plus, why wear both socks and shoes when one of them would do just fine?

Although materialists and atheists try desperately to portray him an atheist, he was anything but.  He rejected the religions and the idea of a separate personal God but definitely believed in a higher intelligence as the Source of the universe.  In fact, on his deathbed, knowing he was dying, he stated that he wished to know the mind of God.

After his death, Einstein’s brain was removed during the autopsy, against his wishes. It later took a bizarre cross-country tour in the trunk of a car and remains an object of morbid fascination.

A few weeks before his death, doctors advised him of an aneurism and that he needed surgery.  He refused saying, “it is tasteless to prolong life artificially, it is time to go and I will do so elegantly”…………………….

Being happy and content with “what is”.  Being unhappy or even prayerful is sorta like telling the cook you don’t like what she put on your plate.

God is experiencing His/Her universe through you!

If the secret to happiness and contentment can be expressed in one sentence or phrase, it is this.

ALWAYS ACCEPT, WHAT IS.

What is, IS!  You may resist, kick and scream to high heaven or whatever but “what is” remains unchanged and unaffected.  Accept what ever the present moment brings always and forever, graciously, with poise, patience and dignity and you will have mastered life.

This is not to say that you can’t have preferences for something different but if you let those desires spoil the present moment, you bring negativity, disappointment and unhappiness into your life.

After all, the eternal, ever changing present moment is all you will ever have.